Next available:
Frozen The Musical
from
£30
Check availability 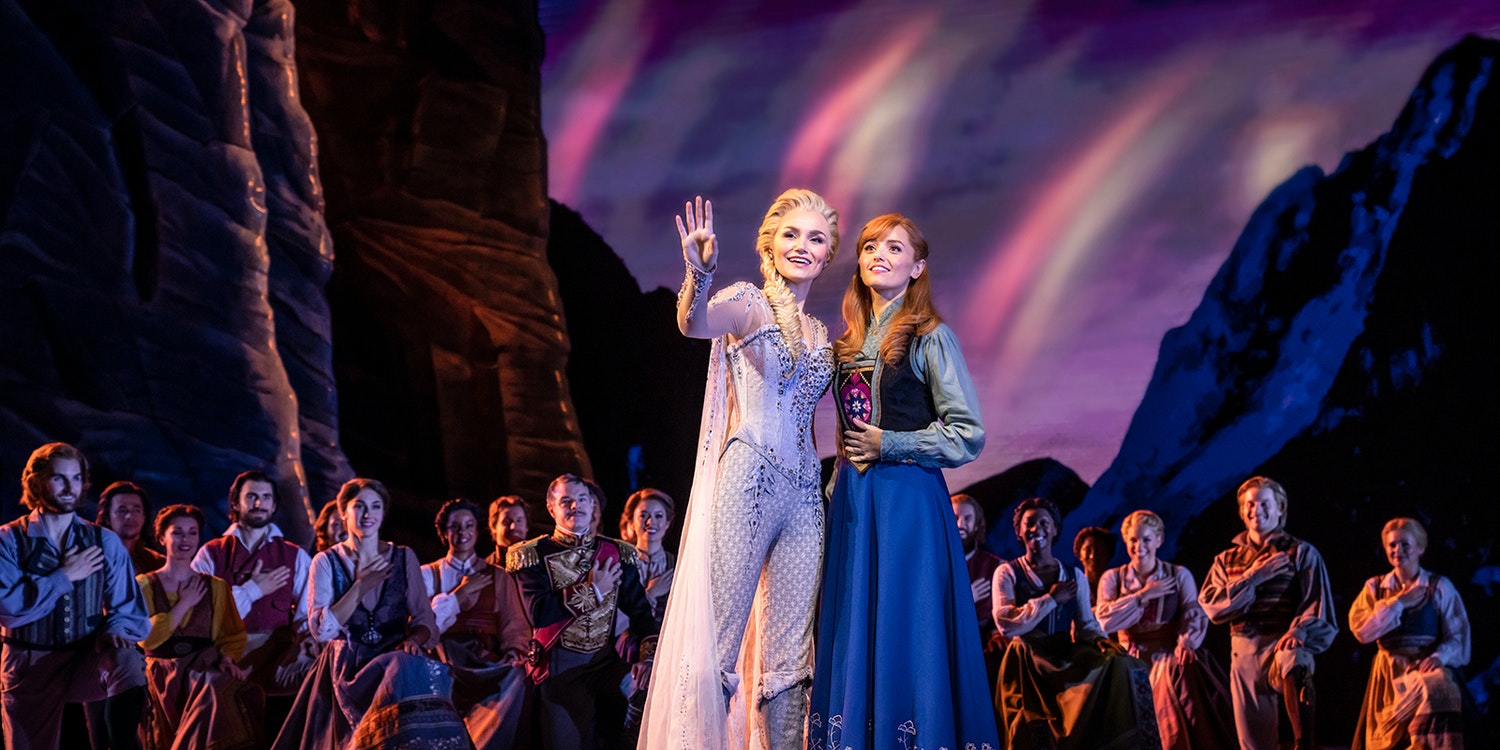 Frozen musical London tickets are available now! With all of your favorite characters and songs, the fantastic world of Arendelle comes to life on stage for a tale about love, hope, and discovery. The beloved sister duo, Elsa and Anna, has come to West End to enchant the hearts of many. The stage design, special effects, and costumes combine to form a breathtaking wonderland spectacle that rivals the likes of which you've seen in previous Disney stage productions such as The Lion King and Aladdin. Even die-hard Frozen fans will want to go see the West End show, which features brand new music from the original songwriting team behind sensational hits like ‘Let It Go.' So, what are you waiting for? Make haste, book your Frozen musical London tickets now and just let it go.

In the magical world of Arendelle, Elsa and Anna are sister princesses trying to find love, while their family is torn apart by a harrowing secret. The stage adaptation of Frozen, based on the 2013 Disney blockbuster of the same name, continues the tale with even more famous songs and backstories for your favorite characters.

Embark on a journey following the adventures of Anna and Elsa, two sisters who were brought up in the same castle but had literal and figurative walls between them. Following the death of their parents in a storm, Elsa must conceal her cryokinetic powers and become the Queen of Arendelle. However, will it be easy for her to just let it go? Meanwhile, Anna has to bring back the family together when a foreign prince sets his eyes on the kingdom. Will she be successful and be able to reunite with her sister? Will Elsa be able to embrace her powers and destiny? To find out, book your Frozen musical London tickets now.

Your favourite songs from the film combined with a brand-new score from Grammy® and Academy-Award®-winning ‘Let It Go’ songwriting duo Kristen Anderson-Lopez and Robert Lopez are waiting for you at West End. Along with popular hits from the film like 'Love Is An Open Door' and 'Do You Want to Build a Snowman', the songwriters have added 12 new songs to the live-stage adaptation of Frozen.

The Theatre Royal Drury Lane is a London West End theatre in Covent Garden, the City of Westminster. The Theatre Royal Drury Lane seats 2,196 people over four levels: Stalls, Royal Circle, Grand Circle, and Balcony. The Theatre Royal Drury Lane, as it stands today was designed by Benjamin Dean Wyatt for the Whitbread committee, and was built in 1812. It has hosted diverse actors such as Shakespearean actor Edmund Kean, child actress Clara Fisher, comedian Dan Leno, the comedy group Monty Python (who recorded a concert album there), and musical composer and performer Ivor Novello. The theatre had first opened with a production of Hamlet. Today, the theatre is owned by Andrew Lloyd Webber and occasionally hosts popular musical theatre performances. The current structure of the building was listed as a Grade I building by English Heritage in February 1958.

Security: Please be aware that for your comfort and security all audience members will be subject to security checks upon arrival at the Theatre Royal Drury Lane.

Dress Code: Smart and casual wear or semi-formals are recommended. Keep in mind, that most London theatres are air-conditioned throughout the year and can get a bit chilly.

Outside Food: Most theatres do not allow outside food inside the theatres but most of them also have a café or restaurant inside the premises or nearby.

How do I buy Frozen musical London tickets at West End?

Buy your Frozen musical London tickets online at www.london-theater-tickets.com for a hassle-free and convenient experience that ensures the best deals and discounts.

How much do the Frozen musical London tickets cost?

The cost of the Frozen musical London tickets will vary depending on the type of seats you choose. Click here to know more.

How can I buy cheap or discount Frozen musical London tickets on West End?

How can I buy last-minute Frozen musical London tickets?

Is there a possibility that I will get partial view seating if I purchase discounted Frozen musical London tickets?

Booking Frozen musical London tickets online will give you the opportunity to select your specific seats, thus, ensuring you do not get stuck with partial view seating. But if you try your luck with lottery tickets, or purchase day seats, your seats will be allocated at the discretion of the Box Office, which can potentially mean partial view seating or split seats.

What is the opening date for Frozen the musical?

What age is Frozen the musical appropriate for?

Frozen the musical does not have a strict age limit. However, it is most suitable for children of 6 and above. Children under 4 years of age will not be allowed.

Where is Frozen the musical playing in London?

Frozen the musical is playing at Theatre Royal Drury Lane in London and opens on 22 January 2022.

How long does Frozen the musical run for?

The running time of Frozen the musical is 2 hours and 30 minutes including the intermission(s).

What is Frozen the musical about?

Frozen the musical tells the story of two sisters, Elsa and Anna, as they embark on a journey to find love only to be confronted with a dark family secret that threatens to tear them apart.

What are the popular songs in Frozen the musical?

Who are the main stars of Frozen the musical?

The main stars of Frozen the musical are Samantha Barks starring as Elsa and Emily Lane playing the role of Anna.

What is the dress code while attending Frozen the musical?

Is outside food allowed while attending Frozen the musical?

No, outside food is not allowed while attending Frozen the musical. Most theatres do have a cafeteria or bar inside the premises where you can get snacks and drinks.

What are the facilities available at Theatre Royal Drury Lane?

Theatre Royal Drury Lane has multiple facilities including Bar, Gift Shop, and Toilets available for the audiences during Frozen the musical.

Can I take pictures or videos of Frozen the musical inside the theatre?